Read on for the story behind the making of this personalised family wall art, from start to finish. 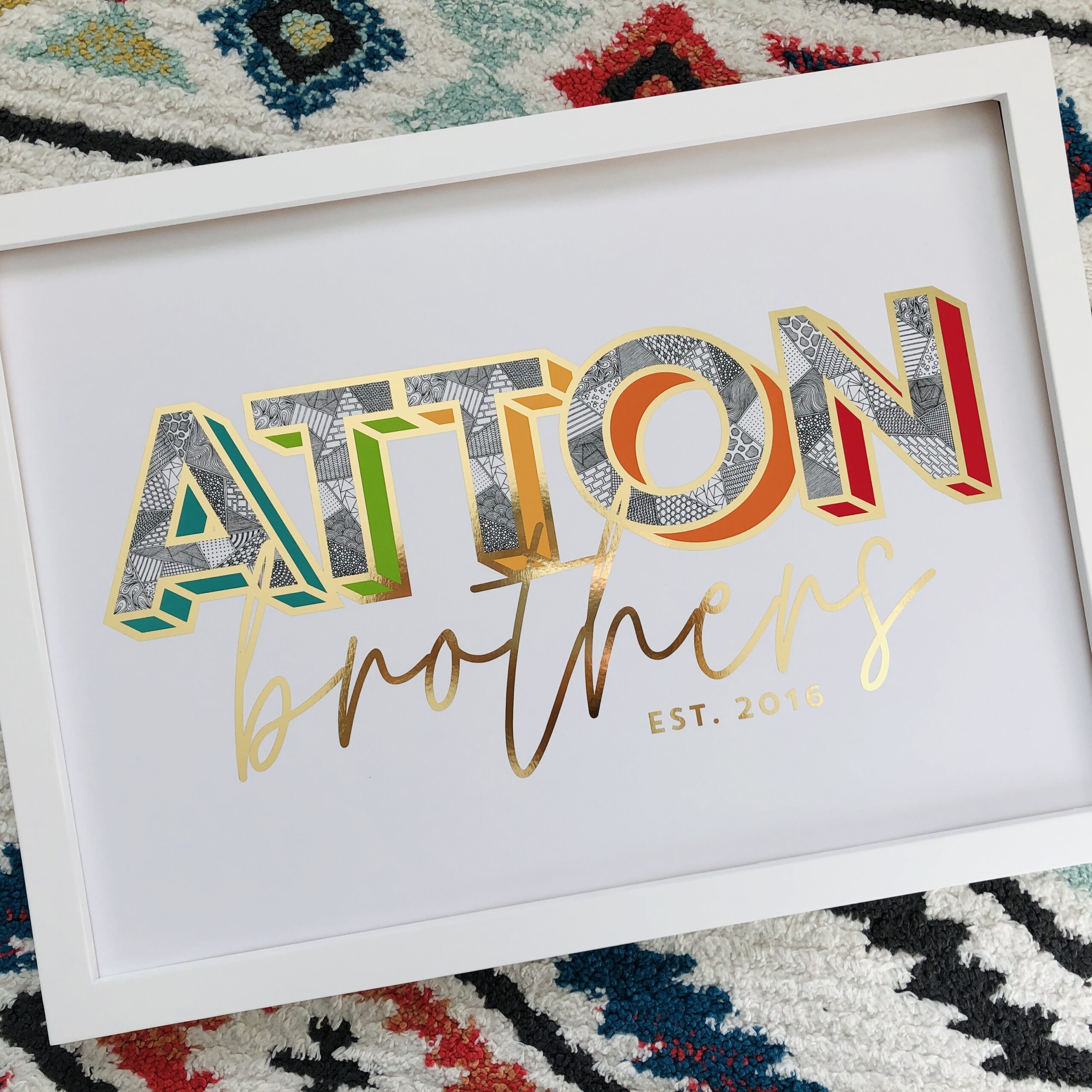 The inspiration behind the making of this personalised family wall art

In June 2021, we welcomed the third little boy to our family. We’re very fortunate that he has slotted into our family with seeming ease. This has meant that I’ve been able to get back onto the creative path a little sooner than expected. I’m not saying that it’s been easy, it hasn’t, and it still isn’t. But, it has allowed me to retain my sense of self through being creative and designing. This piece of personalised family wall art was the first real thing I designed since he was born. I wanted to create something that was colourful and decorative but also that celebrated the bond between the three boys. And so, this Atton Brothers sign was created.

The design started to take shape…

I already had a vision in my head of how I wanted this to look. Around two years ago I spent several weeks creating a full alphabet of 26 letters that were filled with intricate and detailed patterns. I knew that using those patterned letters in my personalised family wall art was something I wanted to do. I was incredibly proud of the work that I put into those designs, yet until this point I hadn’t really known what to do with them.

So, the first thing I did was to create the framework for those designs to be slotted into. Using Adobe Illustrator I created the 3-dimensional aspect of the surname using a sans-serif font. Once I was happy with the spacing and how the letters interacted with each other, I added in the patterns I had previously created.

Next, I chose a mono-line script to be used for the secondary line ‘brothers’. Despite the script font being much lighter than the sans-serif, the size, style and the placement of the font on top of the surname made sure that the font held its own and worked in harmony with the surname.

The typography side of things was finished off with the addition of ‘Est. 2016’, the year that my middle child was born, essentially creating the Atton Brothers. Examples of the original hand drawn illustrations for the intricately patterned alphabet that features in this piece of artwork. This image shows the combination of sans-serif and script font at play. It also shows the areas that need to be made gold in the final design.

Once I was happy with the general layout it was time to start thinking about colour. The finished piece was for the playroom so I wanted it needed to be colourful, fun, and a little special.

I decided to go bold with a rainbow of colours and an added touch of gold. With five letters in our surname there are of course five bright and vibrant colours used in this design. The outlines of the surname and the script font were to be hand-finished in gold ink.

Following a few test prints and experimenting with various gold ink pens I realised that hand-finishing the print just wasn’t workable. The size of the design meant adding the gold by hand was going to prove time-consuming and very tricky. One little mistake, one wobbly line, and I would have to start again. Plus, I really wanted the gold to sing, and I was never going to get that effect using inks. So, I started looking into the different printing options available. The original colour palette is shown here, including a cream colour indicating the use of gold. The first test print, colours were tweaked following this print. The intention was to print these myself and hand-finish them with gold ink. First steps in experimenting with finding the perfect gold pen, however, it soon became clear that the work was labour intensive and costly mistakes could easily be made.

All that glitters is not gold. But could well be gold foil!

I have an extensive background in graphic design and printing so I know all about using foil blocking. Its expensive for a whole print-run let alone one-off pieces of personalised family wall art! Digital foiling however, is a different kettle of fish. While a different method, it’s a great way to add shiny foil to one-off pieces without breaking the bank. So I started looking at printers who offered this service and the costs involved. I found a supplier who offered a good price (despite being a one-off print) and prepared the artwork for print.

Read all about Digital Foiling here.

A few days after sending the artwork off to print it arrived at my doorstep. The quality of the print and the finish of the gold foil was more than I expected and well worth the premium price-tag. The response to the artwork was amazing and resulted in several customers commissioning their own versions. If you’re interested in commissioning a personalised family print for yourself, or a friend, just get in touch!

3 Tips for Building a WordPress Website All About the Colour: Green

Two years ago during lockdown we failed miserably

These gorgeous wooden pin badges are now finally a

Head to my stories and help me decide which backgr

Sometimes being a #graphicdesigner and a mum can b

This website uses cookies to improve your experience while you navigate through the website. Out of these cookies, the cookies that are categorized as necessary are stored on your browser as they are essential for the working of basic functionalities of the website. We also use third-party cookies that help us analyze and understand how you use this website. These cookies will be stored in your browser only with your consent. You also have the option to opt-out of these cookies. But opting out of some of these cookies may have an effect on your browsing experience.
Necessary Always Enabled
Necessary cookies are absolutely essential for the website to function properly. This category only includes cookies that ensures basic functionalities and security features of the website. These cookies do not store any personal information.
Non-necessary
Any cookies that may not be particularly necessary for the website to function and is used specifically to collect user personal data via analytics, ads, other embedded contents are termed as non-necessary cookies. It is mandatory to procure user consent prior to running these cookies on your website.
SAVE & ACCEPT